This is a “Stencyl For Noobs” guide! This is meant to be a good, concise guide for the beginner or a refresher for the more experienced.

What we’re learning: More complicated decision making; the idea of priority and selecting the right path/decision

So you can build an elementary if-statement… is that enough? Well… you can get away with some simple decision making, but more complex logic becomes a bear without some advanced methods. So when it comes to logic, we have different terms/tools that can be applied to our code to make our programming endeavors a bit easier.

In this edition of SFN, we are going to talk about the workings of the “Not” block, the “Otherwise” block and then “Otherwise-If” block.

All of these blocks are found under Flow >> Conditional.

Notice how this block is a hexagonal shape? That means its going to evaluate, as stated in the basic Boolean guide, to a “True” or “False”. But wait, why is it asking for a Boolean then? The little hexagonal slot means it wants us to give it a Boolean too.

So in short, put in a Boolean, get a Boolean back.

Not True = False
Not False = True

CAUTION: Particularly pertaining to mathematical computations, be sure you understand what the true opposite and thus the result of your “Not” block will be. For instance “<” and “>” aren’t actually opposites; “X < Y” and “X > Y” don’t produce totally opposite values for every possible X and Y pair (when X = Y, both would be “False” and therefore not opposites). Instead, “<” and “>=” are opposite; likewise, “>” and “<=” are opposite as well. These kind of distinctions are important, because you want to know very precisely what your “Not” statement is really saying, and recall that even one evaluated answer that is outside your intended logic (one “True” that was meant to be a “False”, for example) can cause you huge problems (and be exceptionally hard to track down).

Using the “Not” block, you can then make “If” code run by supplying a “False”, because the “False” becomes a “True” after passing through the “Not” block. You could check to see if a button is NOT being pressed as opposed to being pressed. That is one use, anyway.

This is why understanding the “Not” block is important: the “Otherwise” block is essentially a glorified “If Not” block. What you do is you can place this directly after an “If” block, and it will run only if the prior “If” block did not run. So concisely:

Maybe now you are asking why we wouldn’t just use two “If” blocks, where one has the “Not” and the other is regular. There are multiple reasons for this: its easier to read and the “If” and “Otherwise” act together. When the “If” evaluates, it lets the “Otherwise” know whether it should run or not. In that way, you only run one conditional check instead of two checks with an “If” and “If Not”, which is better for performance. Also, we are only discussing it in conjunction with an “If” block. Its importance becomes stronger when we add something like the “Otherwise If” block to our arsenal.

The short answer: its cleaner and easier to understand, especially when you come back to your code two weeks later and have to refresh yourself.

The “Otherwise If” Block

The “Otherwise If” block is a combination of the two. It looks at the previous conditional, but unlike our previously discussed block, it does indeed have its own conditional to check (notice the hexagonal slot). For example:

Again, why not just use two if statements then? The reasons are similar in nature to the “Otherwise” block’s reasoning. However, equipped with all three blocks, we now explore why their cooperation altogether becomes important.

The Unison of All Three

The truth is that all three of these blocks can be and often may need to be used together. Therefore, you need to understand how the blocks come together to make distinct, cohesive sections of logic.

First, three concepts about our blocks:

So what do I mean by decision-making sections? Observe:

The two if-statements above represent two distinct sections of decision-making logic. They are independent from one another: neither needs to know what happened to the other one to figure out what it should do. They each comprise their own logic or decision-making sections. On that note, any time you use the “If” block, you are starting a new, independent section!

Next, understand that only one conditional’s code will run PER section. Look at the following: 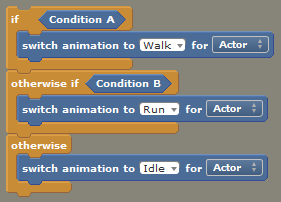 PLEASE NOTE: This example is meant to demonstrate Boolean logic; it does not necessarily represent good animation switching practice.

NOTE: Its worth highlighting that since “Otherwise” blocks always come at the end of sections, they never cancel anything.

Finally, notice one more conundrum: what if the “If” block and “Otherwise If” block BOTH have True evaluations? The “If” block wins, because its first on the decision-making ladder. In that way, its important to pay attention to priority and its relation to position. Look at this: 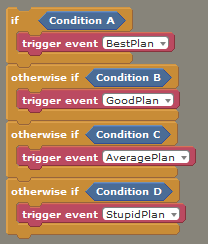 See what we have here? The top “If” always evaluates first and gets first say, followed by each “Otherwise If” moving downward. You can have as many “Otherwise If” blocks following an “If” as you want; it will just keep climbing down until it finds a conditional that is True or it reaches the end.

Phew! You still with me? So to kind of sum everything up:

And that’s that… hopefully I didn’t lose you. Boolean logic can definitely be a beast, but its so imperative to the design of your game. That being said, we’re still not done quite yet. Next time, we’re going to cover things like nested conditionals, the “And” block, the “Or” block, and finally some of the “fine print” of crafting well-tuned decision logic. Meanwhile, hope this helps!